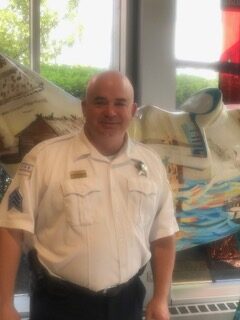 Recently SOAR was able to spend a few minutes with Sergeant Christopher Schenk of the Chicago Police Department’s 18th district that services Streeterville.  Sergeant Schenk is one busy and engaged police officer who does not sit still for very long!

Sergeant Chris Schenk has been a police officer for 21 years where he has worked at the Near North District Station–18th District.  He is a native Chicagoan who grew up in Rogers Park.  When asked why he chose to be a police officer, he had a quick response:  “I wanted to help people and to be of service”. He feels that he has always been called to serve.  In fact, he sees that a job of waiting tables is one of service—“there’s always an opportunity to view what I am doing as service—giving back.”

Sergeant Schenk’s duties at the 18th district, have included being on RBT Theft Team and for a time were on the Troubled Buildings details.  He was promoted to the rank of Sergeant about 4 years ago.  When we asked about his current responsibilities and duties, he was very excited to share what he does.

First, he recently coordinated the CAPS (Chicago Alternative Policing Strategy) teams for
6 districts in the city. He supervises the 18th district CAPS office. The CAPS meetings held in each city’s districts offers a unique opportunity for the community to interact with police officers working in those locations to problem-solve and work together for a safe neighborhood.  Sergeant Schenk knows the value of the community coming together to develop trust and confidence in the officers assigned to serve their communities.  Sergeant Schenk gets great satisfaction when “people come together, when partnerships are able to grow and when results are positive—that’s what it is all about!”

Sergeant Schenk was the Supervisor for A/3 Community Emergency Response Team (CERT), which encompasses 6 districts in the city.  CERT, which was started in 2005, is a program that gives the public an opportunity to learn basic skills for disaster response and life-saving skills to benefit the communities in which they live.  (OEMC is the parent organization).  He has along with others, trained over 4,000 people in the city since the program’s inception.  He believes partnering, teamwork and working together. There are about 300 active members operating in the city now and in pre-COVID times and they provide a wide range of activities that include:  staffing a COVID -19 hotline, traffic and pedestrian control at festivals and other city events, being an ambassador for events and other activities related to disaster preparedness (you have probably seen these citizens in their gray shirts and yellow safety vests at various functions).  Clearly, something Sergeant Schenk is proud to be a part of—and he is anxious to offer more trainings as soon as live trainings can safely be conducted in our post-COVID world.

We asked him what has been most moving to him in his career as a police officer.  He recalled going to NYC days after the 9/11 incident to offer his services.  While he was waiting in a long line of like-minded volunteers at the Javits Center, he met three engineers from Ohio who were also planning to volunteer.  The engineers were turned away because NYC was only prepared to work with first responders (police, fire, EMTs, etc.) at that time.  Sergeant Schenk was so impressed with their desire to help that he gave them the hotel room that he was provided with during his stay.  He said he didn’t mind sleeping on the street if it meant helping others who also wanted to serve.

We asked about a favorite moment in his career.  He remembers pulling a woman to safety from a bridge where she was attempting suicide.  “Saving a life”, he said, “there is nothing better than that.”

What does a man like Sergeant Schenk do in his “spare time”?  He laughed as he rattled off all the public service organizations including the Police Memorial Foundation where he has volunteered countless hours.  He recognizes his duty and commitment to be a part of his community.  He sees his commitment as a “24/7-365 day a year job”.  There is never a time when he does not frame what he is doing as service.  And at the end of a long day, he enjoys sitting on his back porch and relaxing….to get ready to serve again. 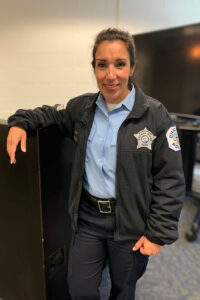 Officer Theresa Kelly is a licensed Clinical Professional Counselor and an active Chicago Police Officer assigned as the 18th. District Mental Health Resource and Domestic Violence Liaison Officer. She takes an active role as a member of the Chicago Police Department’s Crisis Intervention Team, teaching and assisting officers at the district level on how to properly handle calls involving individuals in crisis. She is responsible for designing and implementing mental health and public safety programs within the community that aid in bridging gaps and building relationships with the police. With 20 years’ experience working in various capacities within the field of mental health, her experience includes working in residential treatment facilities for juveniles in post-detention to teaching college-level psychology courses.

Officer Kelly received her master’s degree in clinical psychology from the Illinois School of Professional Psychology. Her clinical focus is anxiety, trauma, and stress related disorders. She utilizes an integrative approach, with a concentration on Cognitive Behavioral Therapy and Mindfulness-Based Cognitive Therapy. She is also a certified clinical anxiety treatment professional and certified clinical trauma professional and also works with both individuals and couples in private practice. The daughter of a police officer, Officer Kelly, a mother of four, comes from a long line of first responders. She is most proud of her ability to utilize her education and experience to help in her job. In her spare time, she enjoys being with her family and friends.

Passionate about officer wellness and fitness, Officer Kelly has created an Officer Wellness Week during which fitness and nutritional experts come to the District to educate officers on healthy lifestyles. Last year she hosted a Biggest Loser Challenge in which many of the District’s officers lost weight (up to 18 pounds) and learned about healthy eating choices.

When we asked her what we, as SOAR members and residents, can to do help and support the 18th District she had the following suggestions:

These meetings are set up specifically for the community and are your connection to the Chicago Police Department. This is where residents can alert the police about what you see happening in your neighborhood.

Police District 18 CAPS (Chicago Alternative Policing Policy) Beat Meetings CAPS meetings are typically held in person however due to the pandemic these are held virtually. The next meeting is scheduled for Thursday, September 3. We will post the details and Zoom link in the newsletter. You also can follow District 18 CAPS reports on Twitter.

By attending court hearings for individuals arrested while committing crimes, Court Advocates are recognized for their service, attendance and help show that the community cares about prosecution of offenses committed in our neighborhoods. The Court Advocacy Program is run through the Chicago Police and Cook County State’s Attorney’s Office. Training is provided. Email here for information and to apply or call 312.742.5778.

When you see an officer on the street, he or she will appreciate a ‘hello’ and ‘thank you.’ A great way to pass on your support and encouragement is to go the extra mile to email or write a letter commending a specific officer. These messages are passed onto the entire Police Department. You can ‘compliment an officer’ at this link. 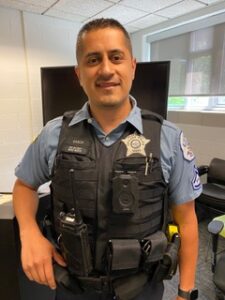 Officer Jorge Garcia proudly wears his insignia on his sleeve: “FTO”- Field Training Officer. It is his job to train the new recruits from the Police Academy. Two to three lucky officers in training spend months in the field learning from Officer Garcia, who is a competent and highly experienced officer. He has studied the law, so he is able to provide the basis of legal knowledge that all members of the criminal justice system need to know to do their job effectively. While he trains them in policy and teaching them the procedures, he provides them with a foundation of the deeper commitment that being a police officer brings to the communities they serve.

Officer Garcia’s strength is his attention to the people he encounters. He has a respect for human dignity and is very cognizant of the potential mental health issues that are so prevalent in today’s society. By recognizing an individual’s needs he is able to keep dangerous situations from becoming more tense. He was nominated by the National Alliance on Mental Illness (NAMI) for an award related to his sensitive treatment of a youth in distress. When Office Garcia realized that the way to reach this youth emotionally was to bring him a “happy meal” –he made it happen and a potentially disastrous situation was averted. These small and seemingly insignificant acts go unnoticed at large, but is the reason that Officer Garcia is such a role model for his community and to his fellow officers.

Officer Garcia joined the police force over fifteen years ago as a young man in his early twenties. He always knew he wanted to be in law enforcement, as he saw his cousins engaged in a noble profession as police officers.
We asked Officer Garcia to share a story from his career that he felt most proud of. It was a day when he was assigned to protect a crime scene. The officers already on the scene had completed their work and had no leads as to who the suspects might be. No one in the community was willing to come forward and share what they might have seen. Officer Garcia astutely surveyed the scene and discovered a few homeless persons on the periphery. He went up to them, engaged them in conversation and before long they disclosed to him all that they had witnessed…and they were eventually able to solve the crime.
Law enforcement runs in the family—his wife is a Master Sergeant with the Illinois State police, where she maintains media relations for the State police. When he is not attending to his job, he loves to spend time with his two children and his wife. He also loves to work out to stay fit for the rigors of his job. Thanks, Officer Garcia for all you do for the City of Chicago.
Go to Top